Get The BLUE Tub! 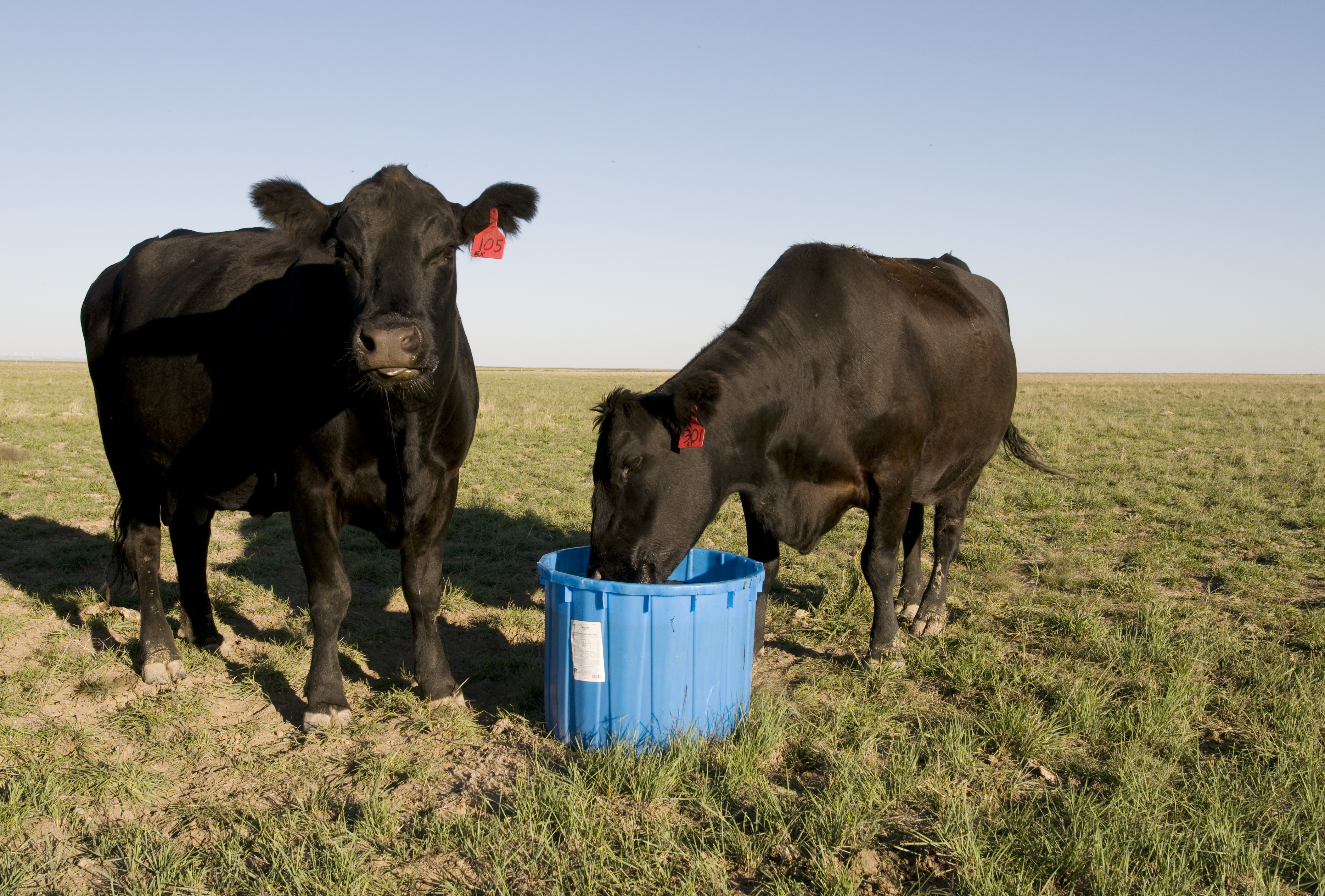 Every region faces forage challenges: hot weather, cold weather, dry conditions, wet conditions. Assumptions about feed, water, salt and nutrient levels can be costly: lack of weight gain, reduced reproductive capacity and sick or dying animals. But you can make proactive decisions to improve the health of your forages and your herds.

As heavy and tough as hay bales are, they are open to risks when exposed to the elements, especially in a freeze-thaw scenario. During a winter season, they can shrink by up to 10-15 percent of their weight and lose 10 percent of their overall digestibility, according to Barry Yaremcio, Beef/Forage Specialist with the Alberta Agriculture Information Centre, in Stettler.

“If you had a 14 % protein bale in the fall, by the following feeding season you could be down to 11 percent,” says Yaremcio.

Even if you had a test done when you made the hay, he recommends a second test before starting to feed it again the following year. Knowing the exact levels is critical to making decisions. You may need a new feeding strategy to solve deficiencies, including integrating supplements.

Out with the old

Time is not a friend to forages. Two-year-old hay will lose its nutrients. Yaremcio knows of a case where 20-30 percent of new calves died due to lack of nutrition from consuming old feed.

“The quality of the hay stays constant until the head emerges, then you see a two percent reduction in protein per week.”

Fresh or supplemented feed is the best solution.

If hot and dry conditions persist, grasses can mature three to five weeks earlier than normal. Nutritional values decrease and help is needed to provide herds with required levels. The solution may lie in a combined Creep Feeder and supplement strategy to prevent costly productivity reductions.

Research during droughts has shown big gains, up to 150 lbs on calf weaning weights, when using a Creep Feeders, adds Yaremcio.

Salt of the earth

Cobalt and iodine are non-existent in Western Canadian soils. Changing from a blue salt block to fortified salt can lead to a 25-pound weight gain for calves, an investment Yaremcio says will pay for itself.

“Cattle consume up to 75 percent of their salt at night.,” he adds. “If you have a deficiency, put a salt station where they sleep.”

Producers who fence off water supplies and control intake get advantages like increased weight gain for calves and healthier cows. Animals walking in their water source stir up mud and solids, filling up on unhealthy substances. If they drink from a clean water source, they will drink more, eat more and gain more weight.

Find the answers in feed tests

Unfortunately, the vast majority of producers are not accessing valuable feed test information, a trend that has been around for some time.

“It’s one of the underutilized management practices out there,” Yaremcio says.

When results are returned, he recommends you review them, get advice and use standard or customized products to make up the losses.

Planting new forages, adding in legumes and winter species, and rotational grazing can all help alleviate nutrition losses. Leaving cattle out in pastures longer can increase retained soil nitrogen substantially, just from their own waste.

Sustainable. Alternative. Organic. These terms have become mainstream when consumers talk about foods. But, they are also becoming more common as manufacturers and producers look at animal feed nutrition options. With changing consumer trends and expanding feed research, producers and manufacturers keep creating new ways to juggle all these developments. The challenge is how to stay on top.

Animal feed sustainability has moved from a topic of study to a documented agricultural strategy. The Food and Agriculture Organizations of the United Nations (FAO) report, Towards a Concept of Sustainable Animal Diets, offers their model as a workable solution to providing benefits for all parties.

Producers are exploring alternatives, focusing in on what they are feeding and how it is made. Environmental concerns make natural supplements, with no fillers and no additives, sold in biodegradable or recyclable eco-tubs, a very attractive alternative. Vitalix offers these choices.

In a one-step-at-a-time scenario, big steps like these can make a measurable difference.

Misconceptions, misinformation and evolving consumer passions about healthy eating and antibiotics have producers searching for methods to meet these trends.

Mike von Massow, University of Guelf, Food, Agricultural and Resource Economics professor, presented on Consumers’ Attitudes on Meat Production: What They Know, What They Don’t Know and Why It Matters at the 2017 ANCC. He shared consumer behaviour research and addressed the confusion consumers face and the challenges facing manufacturers and producers.

In his blog Thoughts on Food, von Massow shared Nielsen research showing only a small percentage of Canadians are vegetarian or vegan, but, a larger number are planning to increase greens in their diets. Decision-making on what to eat and where to eat is definitely fluid. But so are the ways manufacturers make and producers choose animal feeds. Accurate information can help bridge the gap.

Consensus on how to define, set standards and market organic products remains elusive. The USDA recently scrapped its certified organic research and promotion program, started in 2017, citing lack of support and too many outstanding issues. However, some producers seek this option. The challenge is finding a supplier that meets needs, both product-wise and volume. For many, going for the healthiest option in the traditional feed and supplements market may be the best solution.

The juggling act between current trends and future feed regimes requires careful assessment of product profiles, balanced with each producer’s feeding program. Reading, researching and restructuring are, and will continue to be, essential components of creating a sustainable feed strategy that is future-proof. The solutions lie in collaboration.

Essential oils, like eucalyptus, ginger and oregano, are well-known in the human natural health arena. Historically, they have also been used in eastern and European animal care for centuries. Today, they have become a key component of the North American animal feed supplement market. Here’s how it became an important choice for suppliers and producers.

Why the movement to essential oils in feed?

The rise in essential oil use, particularly for cattle, is directly related to the removal or banning of antibiotic growth promoters. It is also due to feed developers leading the move for more natural ingredients in their products.

As research grew around the globe, the options for suppliers to opt for more natural supplements also grew, creating a win-win for product creators, producers, livestock and, ultimately, consumers.

In 2009, European researchers found that essential oils can reduce diseases (enteropathogenic) in a cow’s digestive tract and aid cattle in absorbing and utilizing nutrition in feeds. They also reported ruminants’ digestion improved, feed was more stable and palatable, and products had a greater shelf-life.

In 2016, researchers from Spain and Brazil published results that adding essential oils to beef cattle diets may boost animal production and meat quality.

Unique Process: We micro-infuse essential oils to create quality products. Blue Tubs contain heat-stable Vitamin A that protects and enhances rumen. Herd health is all about proper digestion, and our supplements help you see the improvements quickly.

Your advantage: Healthier herd, with a lower cost per head.

The Beef Cattle Research Council’s “Canadian Beef Research and Technology Transfer Strategy 2018-2023” says trends for meeting public health concerns and industry perceptions are driving feed producers to focus on natural alternatives. Although Canada has a strong reputation for healthy production practices, they want to see even more research, particularly to further quantify the benefits of options such as essential oils and vitamins for cattle.

Feed for All Species